In Berlin there are now two airports: Tegel (the main international airport) and Schönefeld. On 2 June 2012, at 10:50 pm, an Air Berlin Boeing 737-800 operating a special 50-minute sightseeing charter flight over the city will mark the end of more than half a century of Tegel’s commercial use.
Schönefeld is being prepared with the construction of another landing strip and the big news for pro and amateurs runners is that we’ll have the last chance to walk (or run) on the airstrip’s tarmac by participating to the “6th Berliner Airport Run”, on 22 April 2012. Around 3500 participants are expected, with an increase of 50% over last year (2125 starters).
The track is a 10k course (which is to be run twice by half marathon runners). It’s going along the construction side of the new Airport Berlin-Brandenburg BER, on the new runway and by the new terminal.  This is the map of the course: 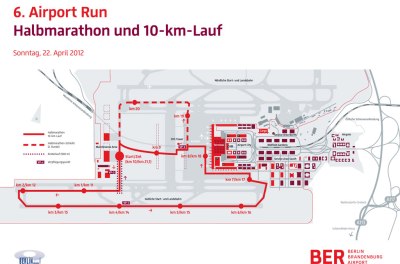 It should be a good chance to make a new Personal Best, since the course seems to be very flat and fast (even if a windy day could change the plans of people looking at the chrono).
The current competition records are the following:
For more informations visit the official website: http://www.berlin-laeuft.de/airportrun/index_e.php.
Meanwhile…keep on training, people!